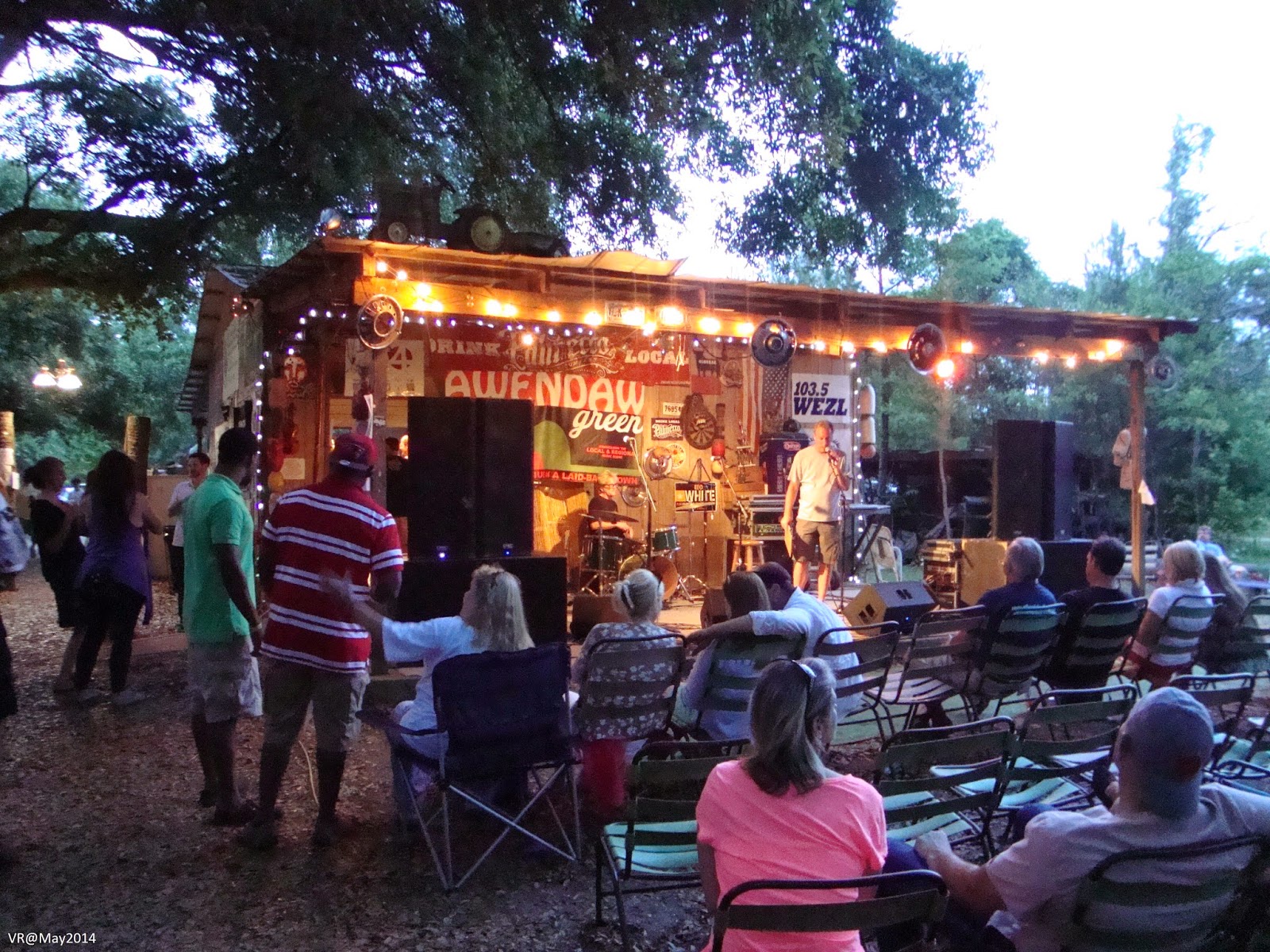 North to south and places in between, the Charleston Lowcountry is blessed throughout the year with a diverse collection of outdoor music venues. You can soothe your fatigued feet in the cool sands of the picturesque Charleston Harbor Resort beach while listening to the jams of a local band with the city of Charleston as a backdrop at the Party at the Point--tops on my list. Travel south to John's Island and unwind on the grassy village green of Freshfield Village while sipping on a glass of sweet tea and grooving to one of its scheduled musical attractions.

Fifteen miles north of Charleston, tucked away in the oak trees of the Seewee Outpost just a stones throw from Highway 17 in the unpretentious and quiet community of Awendaw, sits one of Charleston's more offbeat music venues--not meant to be a pun. Before I transition to the finer points related to this green space touting a bohemian atmosphere, here are a few facts about its host, Awendaw.

Though not widely known by tourists, Awendaw is a cornucopia of wildlife and natural coastal beauty. Named by the Seewee Indians, it resides at the gates of the Francis Marion National Forest and dockside to one of the countries most outstanding wildlife preserves, the Cape Romain National Wildlife Refuge. Blackwater creeks, barrier islands, salt marshes, intricate coastal waterways, fresh and brackish water impoundments and maritime forests are some of its amenities.

In the early days of the New World, Awendaws nearby Bulls Island was a stepping stone to the first European settlement in South Carolina. Settlers landed on Bull's Island to replenish their stocks of wood, water, and food before proceeding further south to what is now the city of Charleston. Awendaw itself became the home of 52 men, woman and children known as the Wappetaw settlers--Wappetaw means "sweet water" and was an early name for Awendaw. In the summer of 1696, this group left Salem, Massachusetts to escape the insane madness associated with the Salem Witch Trials. 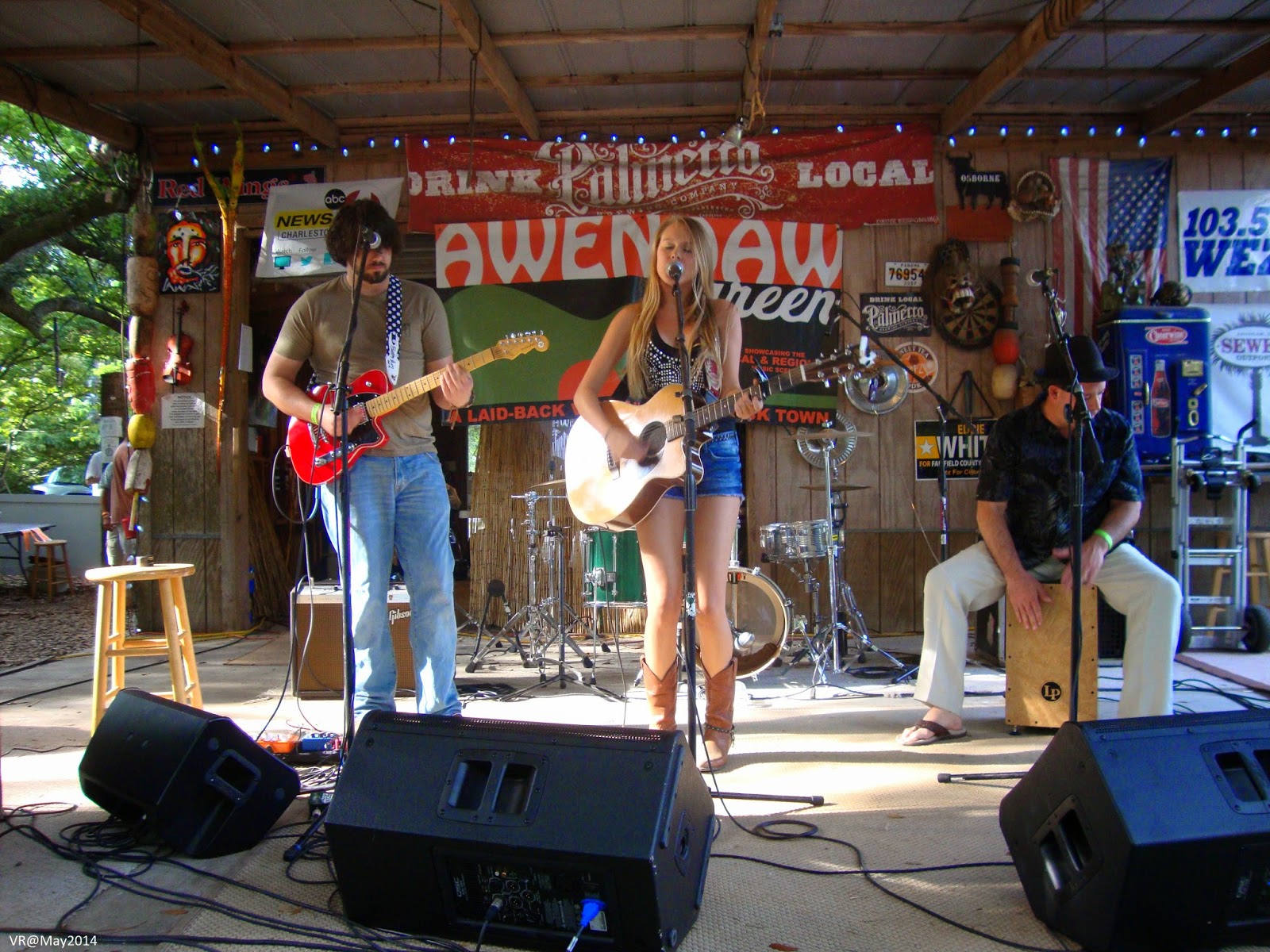 On this Sunday, the 25th of May, it was my first visit to the unconventional Awendaw Green where a tin-roofed, pine-paneled barn serves as a stage and the surrounding green space the auditorium. Musicians and bands from around the Lowcountry and a few outsiders were gathered to compete for spots at another outdoor concert venue. Headlined as the Party in the Park and hosted by WEZL, it is held at the Mt. Pleasant Memorial Waterfront Park. Three bands would be chosen from among the group to open for Eric Paslay and the Swon Brothers on June 10th. I was there in support of Chelsea Summers--currently #1 on the Country Charts in Charleston. Chelsea Summers will be performing at Awendaw Green Wednesday, July 2, 2014 at 8:00 pm. 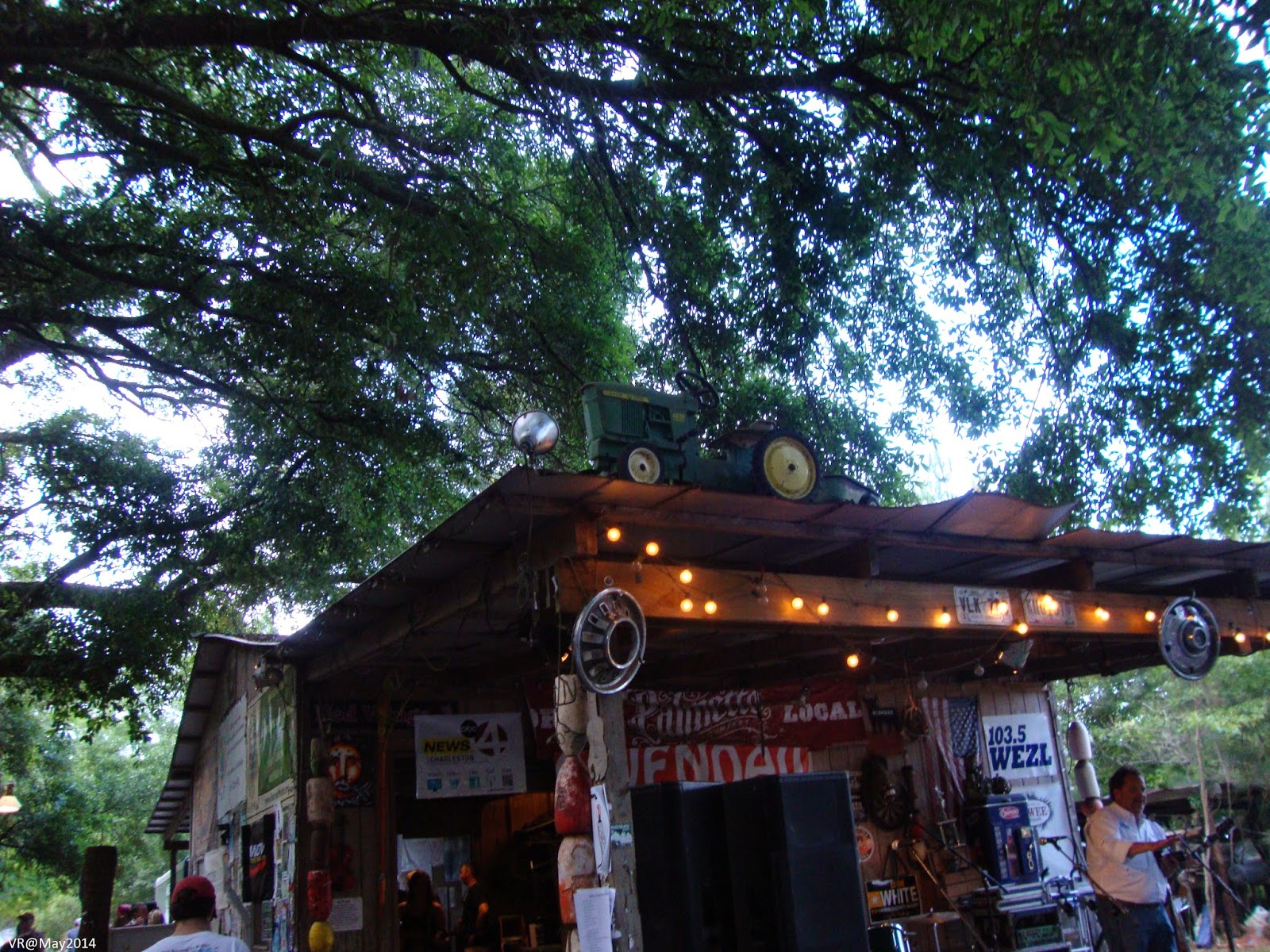 A little green tractor sitting on one corner of the barn roof was an apt reminder this was a Barn Jam. There were a few benches on the perimeter of the stage and rows of chairs lined up in front of the stage, but for a more comfortable recline, bring your own chair and sit anywhere you want under the many oak trees. 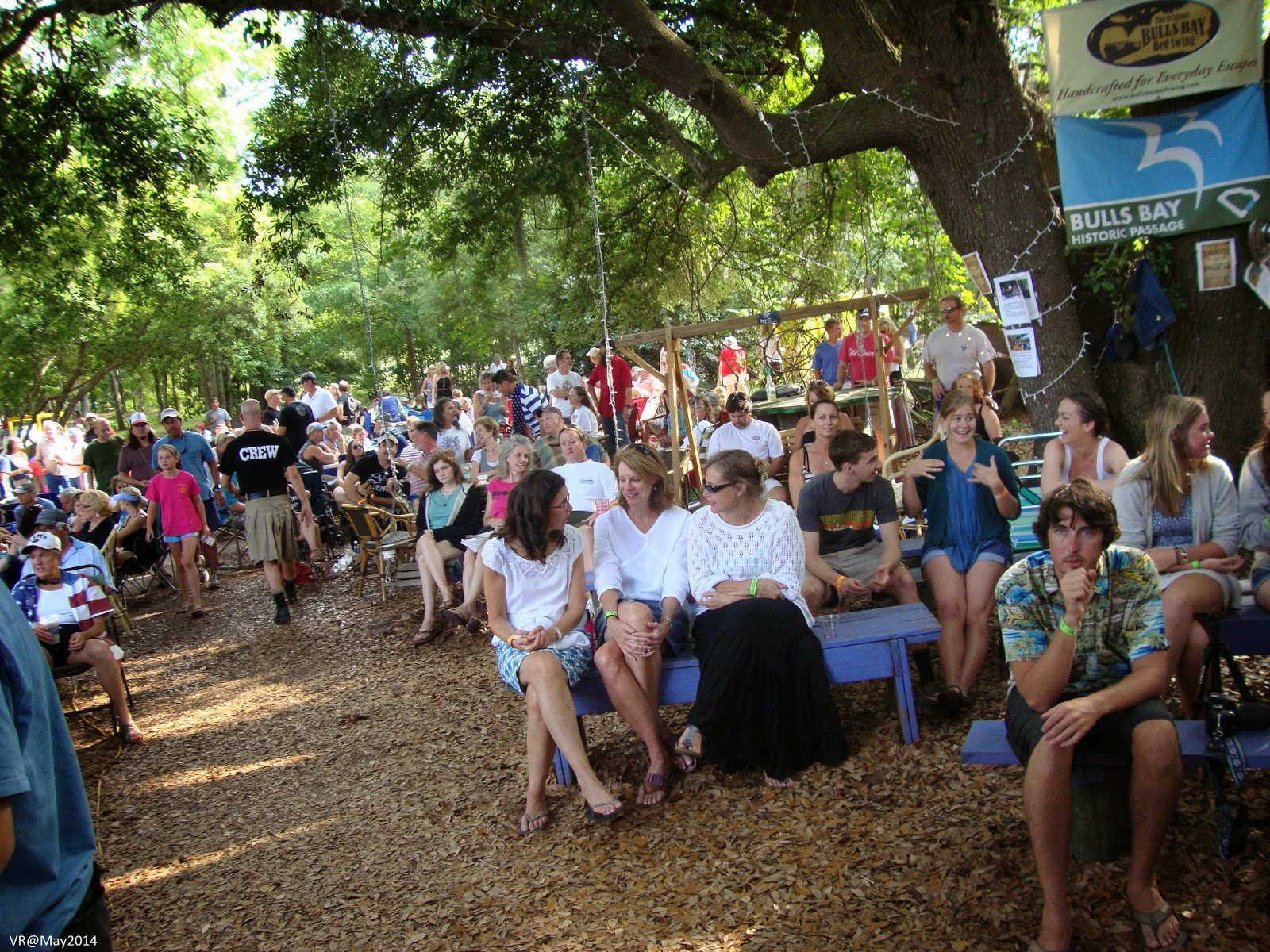 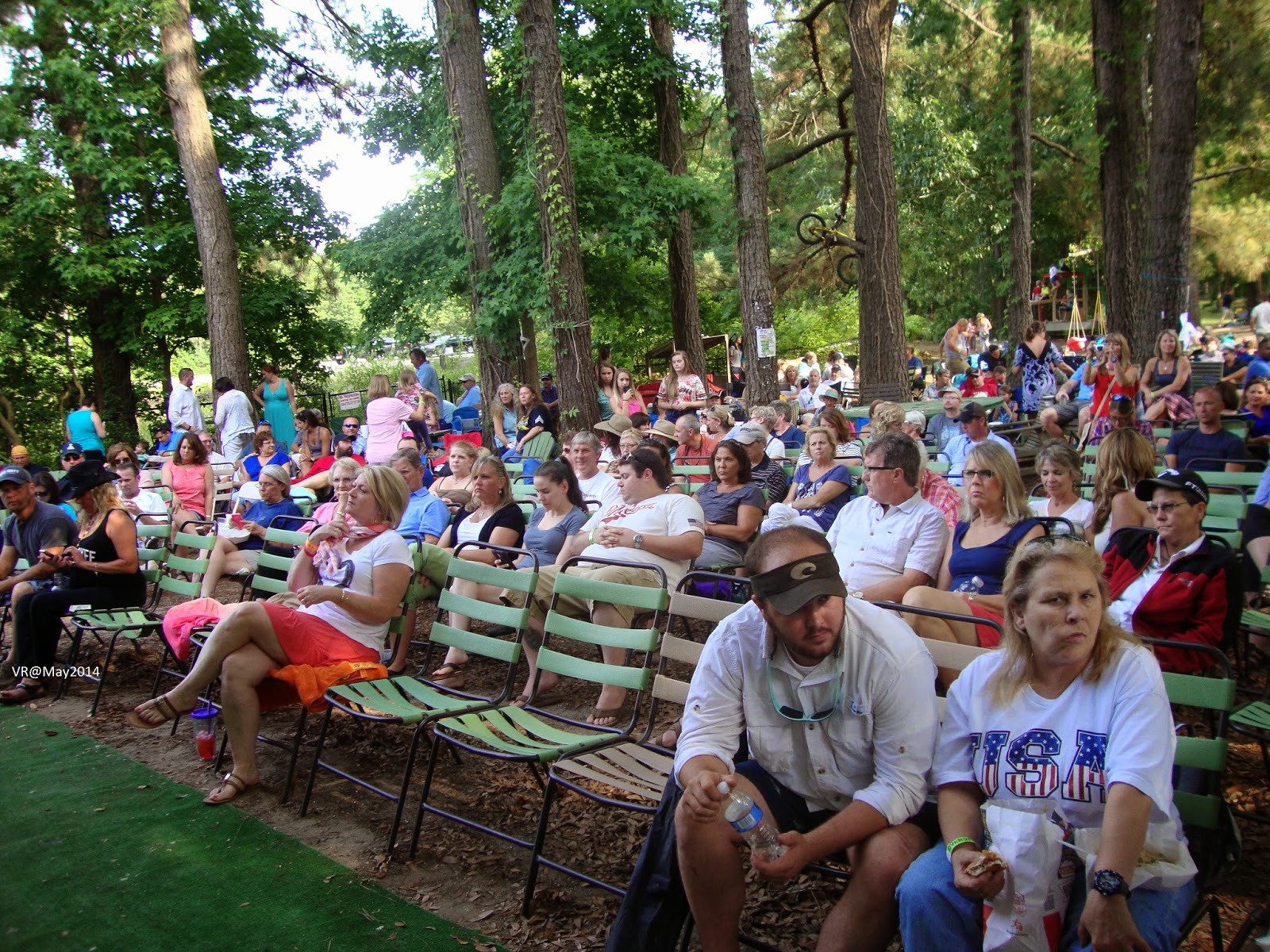 Food and refreshments were available. Wood fired pizza, wine, beer and other typical barbecued foods. Pets on a leash were permitted. Our group was accompanied by Bowser--the beloved pet of the Summers family. All ages are welcome and it is always a family friendly occasion. For a break from the music, a few diversions were available such as a corn hole game and child friendly tree swings. A $5 donation gets you through the gate. The whole affair, by my estimates, had the feel of camping minus the tent.

Although this was a special Sunday event, Awendaw Green Barn Jams run from 6-10 pm every Wednesday night of the year and features a diverse assembly of music from around the Lowcountry and parts unknown. Pack up your portable outdoor chairs and get your feet dirty.
Posted by Vacation Rick at 9:09 PM

Howdy Rick This is a very nice article and the Awendaw Green Family thanks you very much. Eddie White 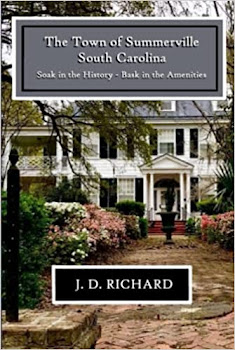 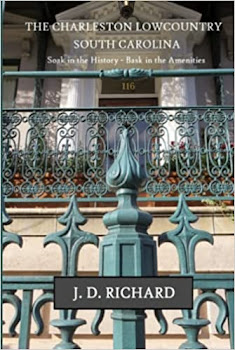 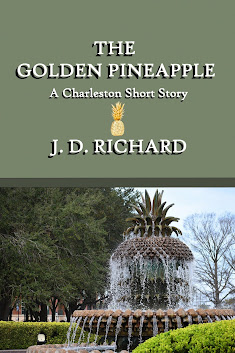 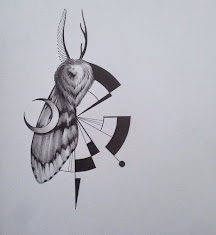 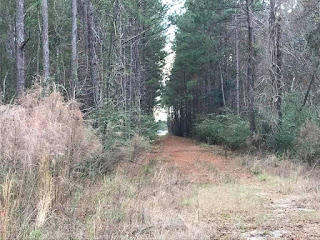